Okay, so I write in a specific way that I didn’t think was particularly strange, but I’ve gotten enough comments about “how weird it is” that I thought I’d share with my patrons exactly how it is I go about scripting a comic book.

(This would be easier if I had ever thought to save a step-by-step process from one of the scripts I’d already written, but hey.)

When I originally wrote this, I’d been in Spider-Man revision mode (for IDW’s Marvel Action Spider-Man #6), that’s where my head is at. Let’s write a (short) Spidey story!

Bear in mind that this is a sample only; it was never submitted to, approved, or published by Marvel.

One Writer’s Scripting Method Method From Start to Finish

PART I: Wherein I plot.

This is straightforward. If I was pitching a miniseries, I’d go through exactly what happens over the course of several paragraphs, including some dialogue and issue breaks. For this, as an ultra-short piece, we won’t need that.

Peter Parker is cramming for classes at a coffee shop. He’s been there all morning. He’s been slamming a lot of coffee. He’s gotta GO.

He gets to the bathroom and has to wait. Just as he’s about to get to relieve himself, his Spider Sense goes off. He can’t just take a minute – lives could be at stake. Tingle beats tinkle.

He changes to Spidey and finds that the coffee shop is being robbed by… oh no… by Hydro Man.

There are two ways to resolve this – end the story on the punchline reveal of Hydro Man and leave the horrors of the battle up to the audience, or have Spidey beat HM in an unconventional way. (By “peeing in the pool” when the bad guy tries to drown him, and freaking HM right out into fleeing.)

This would never fly in a real comic book. Okay, maybe Deadpool. Heck, I don’t read much Deadpool. Maybe this has happened there. I’m not going to go look it up.

I would also add notes as I think of them, sometimes after the fact. The above? I wrote it an hour ago. I came back in to add “maybe a Whizzer joke?” Sure it’s obvious, but I might also forget when scripting and then wonder why I never considered it. Options! I give myself options!

PART II: Break It Down Again.

Next, I write out the page count to try and make sure I have everything paced right.

Establishing the coffee shop, that Peter is studying, and has been at it all day. Some coffee promo he’s taking advantage of has caused him to down way too many cups. Maybe he’s on the phone with someone. Could be MJ. This isn’t in continuity. No one can tell me no.

Peter’s gotta go to the bathroom. All of the stalls are in use – more students taking advantage of the coffee promo. Finally a stall opens … and Peter’s spider-sense goes off. Sigh. With great power...

Spidey bursts in the front door to face the source of his spider sense... and hey, it’s Hydro man. (Oh no.)

Spidey tries to wrap it up quick, webbing the still-solid villain. Hydroman seeps out through the not-airtight webbing. Uncomfortable sight for Spidey.

Hydro-Man isn’t about to waste time with Spidey. He wants a getaway. So he envelops Spidey in water – to drown or pass out, he doesn’t care which. Spidey can’t hold it.

This freaks Hydro Man out. He panics and goes down a drain. (To the sewer? Real thinking there.)

The manager cusses Spidey out for his way of handling Hydro Man. He’s gonna have to shut down the shop for the rest of the day!

This first pass is for…well, like it says, it’s for pure generation; I write mostly dialogue (along with any stage direction I don’t want to forget, or to give the dialogue context.) I sometimes attribute names to who is speaking, and sometimes rely on memory. I just blurt it out, basically, separating panel breaks with a backslash and moving on quickly. This allows me to get a lot out quickly.

Title up top: A CUP OF NO Ext of streetside coffee shop. Smaller neighborhood. Big windows. From inside: I’ve been so productive, you don’t even know-- / Peter at table. Books and notebook (paper, not electronic.) Long line behind him. I’ve written thirty pages of notes! I don’t know what’s in this coffee, but I hope it’s not illegal. I’ve had six or seven cups now. / Split screen. On one side is MJ; the other is Peter. Slow down, big spender. That’s just it – I was going to just buy a small and I won a bottomless cup! The ol’ Parker luck’s worm has turned, MJ! If you say so. Just remember you’re mine come 7pm, so make sure you finish your work.

Like that time Doc Ock trapped you in the... Never mind. / Or when Boomerang... Ugh. I need drier enemies. / Oh... thank goodness. Finally. I thought I was going to explo-- / SPIDER-SENSE. / Facepalm.

Spidey crawling out of the bathroom window. Okay. Robbery in the coffee shop. I suppose I should’ve figured this would happen eventually; Phil refuses credit cards. Lotta cash on hand. / But if there’s one thing I know, it’s that I can handle a thief. / ALL RIGHT, BUDDY! YOU PICKED THE COFFEE SHOP TO ACCOST! Is that so? Yeah, that’s-- / Oh dear God, no

REVEAL HYDRO MAN. He’s using a water arm to hold a barista up and a bag for the money to go into. Tip jar being emptied. Ain’t that just my crummy luck. I figure ignore the banks, ignore the hassle, just hit up a few coffee joints for some easy small money. But you always gotta be there, don’t ya? / Yes Morrie. It was all right there under the terms of service when you signed on to the supervillain contract. Thwip. Gotta try and take care of this fast. I’m about to burst! / I didn’t sign no—hey! Maybe if I cover him in enough webbing, it will-- / Morrie seeping out the pores. Nuts. You kidding me, Spider-Man? Ain’t nothing can hold me! If air can get in, I can get out! And we both know you’re not the type to suffocate somebody!

But I am! You can go to sleep or you can drown, for all I care – but I’m getting’ outta here, wall-crawler! / C’mon, you’ve beat this guy before. You can hold your breath for a lot longer than he’s willing to wait, and you can fight your way out of this! And then you can get back to your paper, get that done, go see MJ, and the day will be salvaged! / You just gotta hold out! You just gotta… / I can’t hold it anymore… / !!!!

Did you just – you – I can feel it! You—that water is ME, Spider-Man! You can’t just! / Down a drain. I’m gonna be sick. / Spider-Man, I’m the manager here – how can I ever thank you? Maybe... look into taking credit cards. / Are you kidding? Have you seen the merchant fees? I’ll be robbed, Spider-Man! Robbed! Yeah… well… / OH NO!

Soggy coffee shop. / Peter’s table was doused, papers wet, ink runny. All that work… all lost because I didn’t want to deal with another wifi failure. / It’s gonna take me all night to re-do the research and type it up. So much for that date. Hey, Mister Spider-Man? I don’t want to seem ungrateful. / So here. A free large latte. You strike me as a soy milk guy. Honestly? Why don’t you take that coffee and shove it… / Into my hand. I’ve got a long night ahead of me.

Part IV: Now Comes The Part on Sprockets When We Script

As you can see, the generation pass already added a few ideas that weren’t entirely there in the initial plotting. Now we get to the part where I script.

I use Microsoft Word, and I number all text placements for both easy editing (change page 12, panel 3, line 7) and ease in placement. My goal is to have as few changes as possible for the letterer before they do their work. Sometimes you don’t spot something until the script is lettered, and you can’t help that, but the goal should be for them to do their thing just one time, if possible.

Also, I do my best to make sure that one page of comic = one page of script. If there’s a lot of dialogue, the panel direction should be minimal. If there’s a ton that needs to be seen on the page, then dialogue shouldn’t be covering it up. I find, if you keep pages 1:1, it helps with that immensely.

And the aesthetics of the format helps keep things clear, too.

(Generally speaking, I often limit myself to five panels or less per page. That’s just a zone I’ve found as comfortable for artists who aren’t fond of grid layout, which I otherwise love.)

Anyway, let’s see where the formatting takes us. I've presented this as a series of images, so as better to preserve my format. 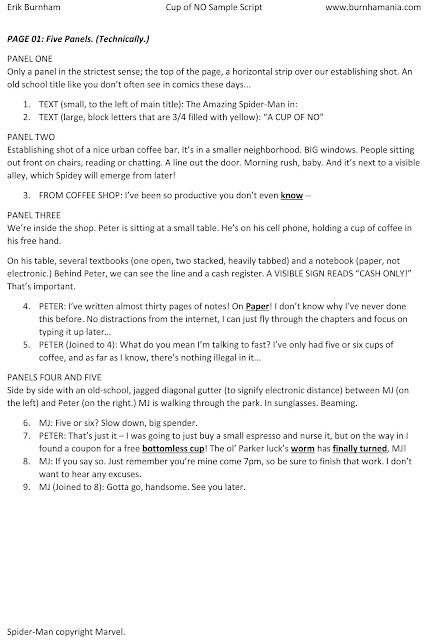 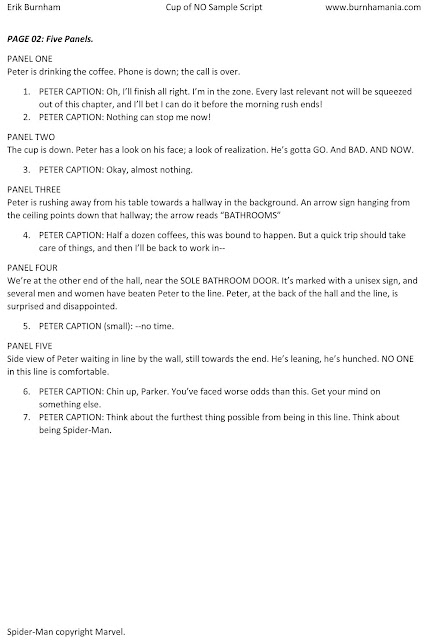 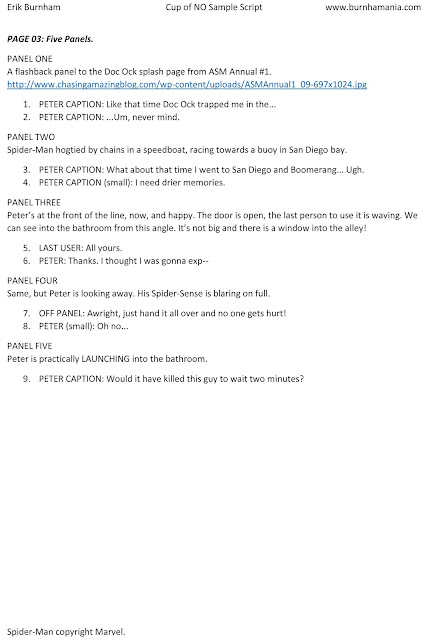 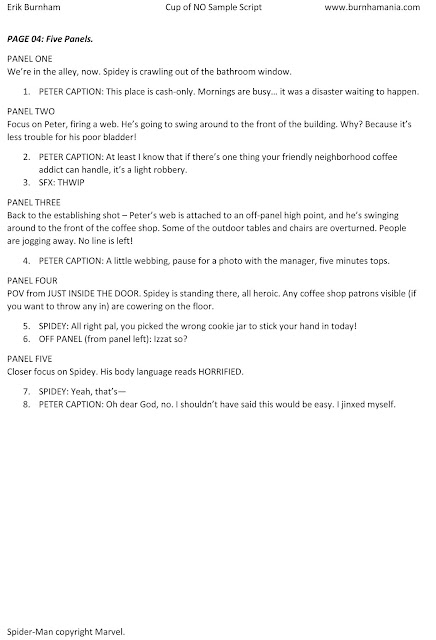 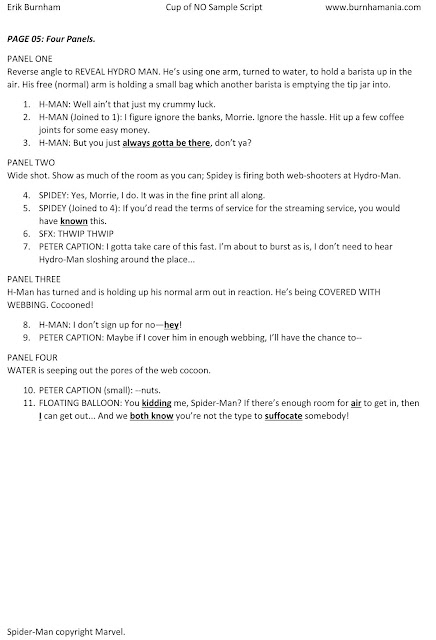 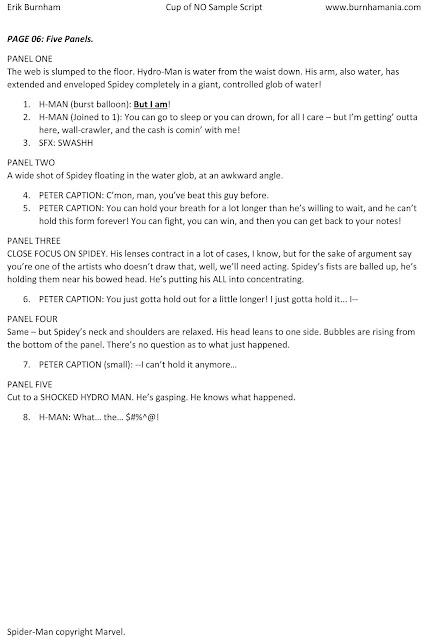 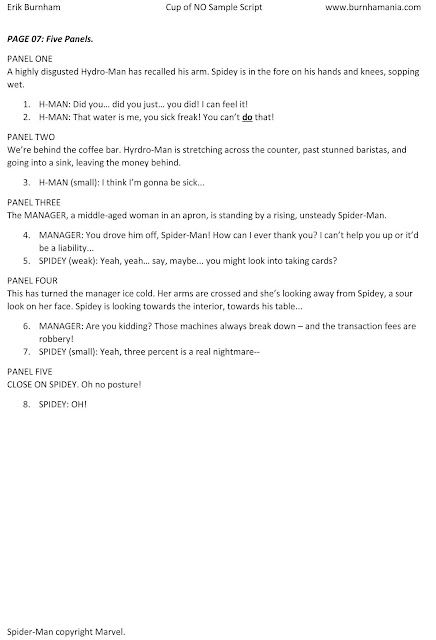 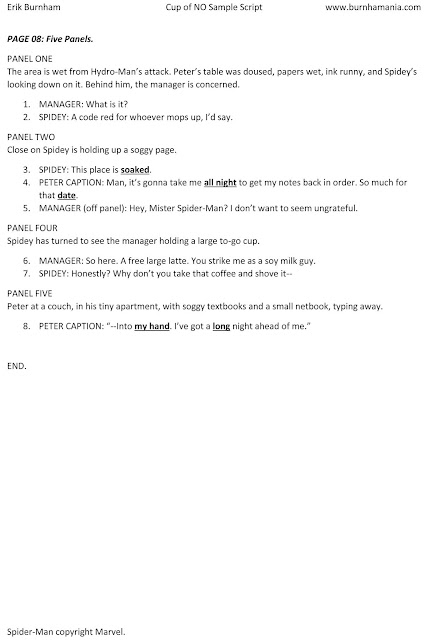 As you can see, things changed from generation notes to final script. That makes the final script closer to a second draft than a first. If I were able to sit on it for a few days and come back, I’d make more changes in dialogue (usually cutting, when possible.)

This method makes for faster scripting nine times out of ten, and usually, unless there are major structural notes or nitpicks (so and so would never use this word, etc) then the format draft is often accepted as done.

(Again, that’s happened for me nine times out of ten and I’m knocking wood pretty furiously to keep things that way!)

Not to say I wouldn't STILL make changes; I noticed after I posted this draft how the word "service" was used twice in close proximity and that drives me up a tree. It's why we always do one more pass before the letterers do their thing!

Once more, keeping one page of script = one page of comic will always keep you from asking "Where's panel seven?" and hearing back "Sorry, that page of the script fell off my desk. Can you write around it so I don't have to redraw the page?"

But that’s my method. I’ve heard it called strange – from the steps to the formatting – but it always makes sense to me.

Thanks for checking this out!
--Erik Burnham