Descending on us from the past: THE DOWN SIDE (or that time I drew some webcomics!)

So way back in 2008 I had been running a revival of my old webcomic THE DOWN SIDE (which initially started as irregular message board postings in 2002.)

I was posting them on my website homepage, enjoying the novelty of a blog template that made updating comic strips easy.

Sadly, I was working a lot at the time - freelancing and holding down a regular job! - so the revival only lasted a few weeks, and most of that was me quickly sketching them out when I had downtime at the day job and lettering them on the computer before I started writing.

Eventually I just ran out of gas with all the demands on my time (I didn't start with a big enough buffer and went 5 days a week... really, this kind of failure is a tale as old as time.)

Anyways last night, I found a cache of the old comics and decided to present some of them to you (so I'd have an easy blog today -- win/win!) This actually makes me want to do some new ones... when time presents itself.

But for now: TO THE COMICS! (Just click to make 'em bigger.)

In this first one, I predicted CIVIL WAR II:

Then there's this one, wherein one of the leads makes a deal with the devil in order to take over a comic shop (which, in a pun I'm still proud of, I had initially named The Merchant of Bendis)

I also had a lot of jokes with Ted, the unemployed Grim Reaper. 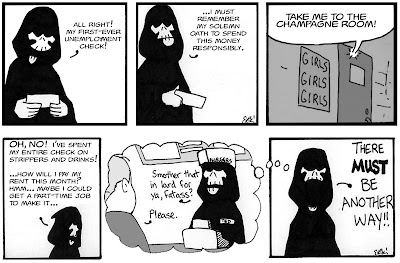 In any case, I'll return to the Down Side again one day. It was too much fun. (Though this time? I'll pick a more reasonable schedule........!)

Talk at ya soon, folks!